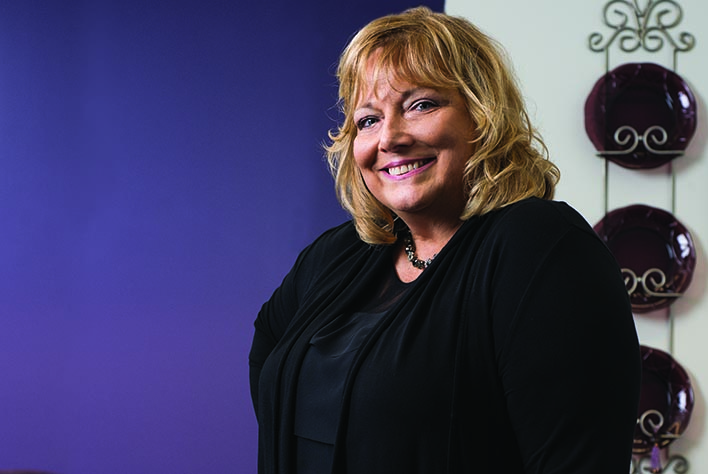 Lisa Sackuvich launched ARJ Infusion Services 14 years ago and wonders where the time has gone. The company is still growing.

“Next year will be 15 years,” said Sackuvich, R.N., B.S.N., CRNI, founder and President of ARJ Infusion Services. “I can’t believe it.”

Sackuvich looks back and says she was lucky to have the right people in her life when she was ready to step out on her own. She had two decades of nursing skills in a variety of settings when she began ARJ Infusion. She had been in hospitals, a physician’s office, home care, home infusion and insurance when a colleague told her she had the right stuff. A physician who Sackuvich worked with told her he noticed how she anticipated the needs of her patients. He had an entrepreneurial spirit, she said, and encouraged her to start her own business. Sackuvich went for it. She has a passion for infusion and grew a company that combines nursing and pharmacy, she said. Her annual revenue is approximately $40 million. Sackuvich employs 65 staff members in six states.

“I was also fortunate that my brother was entrepreneurial,” she said. “I sold him on the idea and he gave me a start-up loan. He felt I was really passionate. We have a really strong work ethic in my family. He believed in me. He’s also an owner in my company.”

Sackuvich said she learned the business end of health care as clinical operation director for a national company when she started a branch for home infusion in Kansas City. She saw potential. She said if she could offer excellent services, she knew she could do extremely well.

“I did infusions a lot. That’s really my love,” she said. “I really never believed the dream would come true, but it did.”

As a child, Sackuvich was sick in the hospital and remembers the trauma of getting stuck too many times. It turned her to nursing, she said. There is nothing better than getting a stick right the first time, she said.

“I love to stick people. Some people are just very good at it,” Sackuvich said. “It’s kind of an art and science.”

Sixty percent of Sackuvich’s patients are children with chronic disorders. She employs experienced nurses who love IV therapy, she said. They have to be competent, confident and like children, she said.

“They have to understand where they (children) are developmentally,” Sackuvich said.

Whether they are caring for children or adults, Sackuvich says she wants the experience to go well and to be honest with clients. Nurses teach their patients to start their own IVs through education, she said. They encourage children to get involved in the process as soon as they are ready. She has them help set up equipment, choose their own Band-Aids, tell the staff which vein to use and encourages them to ask questions. It’s important to get their input, Sackuvich said.

“We want everybody on the same page,” Sackuvich said. “With adults we do the same types of things. That’s a scary thing when someone else touches your body. We want parents to understand our goal.”

Infusion nurses educate children and their parents to help them get through the phases of the initial diagnosis, she said. The children they see primarily have bleeding disorders and immune deficiencies. Their youngest patients are infants, Sackuvich said. Children between 7 and 12 years old learn how to independently infuse themselves, depending on the child, she said.

“It is very much similar to diabetes,” Sackuvich said. “They have to stick their vein, do it themselves.”

Sackuvich has a pharmacy in addition to infusion services in order to provide lifelong therapies, she said. She has a pharmacist on staff who takes physician orders to dispense to patients and a team of patient service representatives who help facilitate patients with their orders. Patient service representatives are there to help with additional community resources, financially and emotionally, she said. Adults they care for have bleeding disorders, hemophilia and autoimmune diseases such as multiple sclerosis and neuropathies. Sackuvich says she is expanding, in part because the population her group sees is rare. The prevalence is not extremely high, she said.

“We feel like we do a really good job,” she said. “We’ve grown. It’s been slow and refined growth. We want to provide that level of service even more.”

Typically in the industry, infusion companies do not always offer full service, Sackuvich said. She has pharmacy licenses in 37 states and is in the process of acquiring licenses in 48 states.

“I don’t want to lose our high-touch service model,” she said. “That’s going to be slow, steady growth.”

“We want to keep our retention of patients and new referrals. We communicate with them on how things are going,” she said.

Sackuvich lives by several principles that have led to her successes.

“I’m just really passionate and I want things done a certain way,” she said. “I don’t make promises I can’t keep. I don’t take no for an answer. I’m very persevering and passionate about patient care.”

Sackuvich said she has given to the community since founding her company. ARJ has donated $2 million dollars to local and national nonprofits over the past 15 years. Staff members volunteer for walkathons and golf tournaments for nonprofits such as the Muscular Dystrophy Association and Myasthenia Gravis Association. Sackuvich has volunteered at a hemophilia camp for the past 20 years.

“I wanted to give back to the community, especially to the patients we serve,” she said. “I just feel really blessed. It just all worked out. It was a lot of hard work. It was having my brother. I just have excellent people to work with and surround myself with those people that have that same passion and know how people should be treated.”

“I started PRN,” Bushell said. “I loved it so much. I loved the company, their goal and the way they help patients. We teach families independence.”

Patients are Sackuvich’s top priority, she said. She makes sure their needs are being met, Bushell said.

“She has that level of understanding as a nurse as well as a business owner,” Bushell said. “I think that from a nursing perspective Lisa is always very caring and compassionate for her nurses as well.”

How To Give Blood